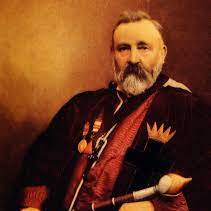 William Wynn Westcott, orphaned at the age of nine, was brought up by his uncle who practised medicine in Somerset. After completing his education at University College London and qualifying as a doctor, Westcott joined his uncles’ practice, subsequently pursuing a successful medical career culminating in his appointment as Coroner for Northwest London. He was also a regular contributor to the Medico Legal Journal and editor of the Extra Pharmacopoeia.

Westcott was initiated into Freemasonry in the Somerset Parrett and Axe Lodge in 24 October 1871 and soon joined many other orders in the area: the Holy Royal Arch; Mark Masonry; Ancient and Accepted Scottish Rite; and the Red Cross of Constantine. Applying to join John Yarker’s Swedenborg Rite, he became a founding Grand Officer and later Grand Secretary on Mackenzie's death in 1886 - his first grand rank at the age of 26.

Influenced as Hockley was by F.G. Irwin, he was introduced to William Woodman following his move to London in 1879. He was subsequently admitted a member of the Metropolitan College on the 15 April 1880 and quickly rose through the offices: Medallist; Conductor of Novices; High Council representative; Precentor and became the Secretary and of the College and Secretary General of the Society in the same year in 1884, five years before going through the chair as Celebrant in 1890.

In 1885 he began the publication of the Metropolitan College Transactions, consisting of minutes and papers presented in the College. On the death of William Woodman in 1891 a sealed letter was passed to the Society by his nephew nominating Westcott as his successor. Westcott became the third, and longest serving, Supreme Magus from 1891 to his death in 1925. He established sixteen new Colleges (only nine now survive) and oversaw the establishment of the Metropolitan Study Group.

Separate to his medical publications, his production of hermetic, Rosicrucian and theosophic papers was astonishing; nine papers to the Quatuor Coronati Lodge; eighty-seven papers to the Metropolitan College Transactions; a translation of the Sepher Yetzirah; editing eight volumes of the Collectanea Hermetica; as well as short books, articles, and letters.

In 1888, together with Woodman and Mathers he founded the Hermetic Order of the Golden Dawn becoming one of its three Chiefs. His writings, particularly the Collectanea Hermetica were effectively the source of much of the public face of the Order. Mathers took control of the Second or Inner Order from 1892 and left Westcott to run the First or Outer Order until 1897, when material with Westcott’s name on were found in a handsome cab, and he had to resign from the order leaving Florence Farr as the Praemonstrator of the Isis-Urania Temple. However, he did not devote his energies exclusively to the Order and continued his busy work as a Coroner as well as remaining active in the other orders and societies of which he was a member until his retirement in 1920.

Surprising as it may seem, Westcott did turn down some orders. Such as the Ordre Martinist; Kabalistic Rose Croix; Ancient and Primitive Rite; the Revived Illuminati 1880; Society of Eight; Fratres Lucis; Apex; the early version of the Sat Bhai and probably other orders we do not know about. But Westcott did help T.H. Pattinson in 1900 revise the August Order of Light rituals prior to its launch. In 1916 he was admitted by full ceremony into the Stella Matutina Adept grades and formed the Secret College. He resurrected F.G. Irwin’s Royal Order of Knights of Eri in 1917. However, he did not devote all his time to other orders, as he wrote seventy-two of those S.R.I.A. papers already mentioned and formed all sixteen new colleges after the fragmentation of the Golden Dawn in 1900.

If we want to put his life’s achievements into perspective let's look at the challenges he had to overcome as a family man, how would you cope?  He lost both parents when a child, which may be why he wrote the first history of suicide written in English, Suicide: its history, literature, jurisprudence, causation, and prevention published 1885. He had six children: George committed suicide in 1906; Edmund died of a festering leg wound in 1907; Elsie committed suicide in 1918. It was then that Westcott quietly retired completely from public life, although the S.R.I.A. refused to accept his resignation. The couple left for Natal and South Africa to live with Lillian in 1920 but returned for a visit in 1921; his wife fell from a first floor window into a courtyard and he subsequently left for Africa for the last time, alone. But the trials did not end there. One year before he died of Bright's disease in 1925, his daughter Lillian who had become a chronic invalid died before him.

Like many giants of the late Victorian age, it’s almost impossible to understand how he achieved so much in so little time. Many, including the writer, regard Westcott as the greatest member of our College and Society.

Some take a contrary view possibly because the Order of the Golden Dawn forms a much larger part of their own lives than it did Westcott’s. In particular, it seems he is never to be forgiven for creating the Golden Dawn rituals from the Cypher Manuscripts rather than gaining initiation and a proper charter from a bone fide Continental Rosicrucian mystical order. The noun ‘mendacity’ has been used by some writers with regard to Westcott’s actions more often than it seems to have been applied to any other prominent figure. But perfection is what our Society teaches us to seek, and it is not found in this world. Projecting their anger onto him for not founding the order that they thought it was, they overlook what it was, and what it achieved. It is a very English attitude to seek to diminish the reputation of a man whose achievement was profound, influencing almost every aspect of hermeticism over the century since his death.