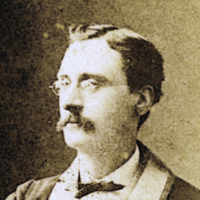 Born in Dublin, 10 August 1838, Robert Cottrell Wellington Waterloo Little moved to London in 1862 after deciding against a career in the priesthood. He was initiated into Freemasonry on the 20 May 1861, aged 22 years old in the Royal Union Lodge, No. 536 (now 382), and was appointed a clerkship in United Grand Lodge of England in 1862 and became a second clerk and cashier in 1866 before becoming secretary of the Royal Masonic Institution for Girls from 1872-1878. His employment gave him ample opportunity to pursue with some energy his interests in Freemasonry and he rose to senior rank in many orders. He also founded the Order of the Red Cross of Constantine in 1865. Its early relationship with our Society is a matter of much speculation.

His fairly-distinguished career is no indication of the events he became involved with, was perhaps central to, that culminated in the foundation of the Societas Rosicruciana In Anglia (S.R.I.A.) on the 1 June 1867 by Wentworth Little and six other freemasons. He became the founding Master General and then two years later the first Supreme Magus of the Society. He was also responsible for the separation of the High Council of the S.R.I.A. from its College on 24 April 1874, thereafter, being referred to as the Metropolitan College, meaning the ‘autonomous’ ‘prime’ College of the Society - as it has remained to this day.

The history of the foundation of our Society and our College has been a matter of study for many years and was not fully understood, or in the case of the Scottish Rosicrucian society that admitted R.W. Little hardly at all. But those of us who study the life of Christian Rosencreutz, and the fraternity with which he is associated, recognise that the description of the events surrounding the foundation of our Society have the quality of an allegory. That is a story whose meaning must become known rather than merely understood as a series of historical facts. In that respect the purpose of R.W. Little's life is of the utmost importance.

It is striking that Little was 29 years old when he founded the London branch of the Scottish Rosicrucians as Master General and only 31 when he became Supreme Magus. His were the concerns of a young man who sought to understand a world around him in spiritual and religious turmoil. His achievement was to re-imagine a past and create a form that became a new vehicle for spiritual renewal.

Despite his youth he had the evident authority and manner to be appointed Supreme Magus. He was enthusiastic and active in promoting the Society and contributing to its Journal, the Rosicrucian, which in its early years also covered the Order of the Red Cross of Constantine. He died in 1878 at the age of 38 of tuberculosis, the curse of his age.

Of many of our early members, including those who form part of these short portraits, we know a great deal, almost too much. But of R.W. Little it is almost impossible not to conclude that there is much we do not know, perhaps will never know, and were never intended to know. Perhaps this is because those true Masters of whom there are few at any time have little regard for the mundane events of a life and choose to become anonymous to the world around them. Thus, they understand their purpose and achieve the goal that the present moment has required of them before departing without notice. Those of us who now work within the S.R.I.A. and its premier College do so in a present that Robert Wentworth Little created.