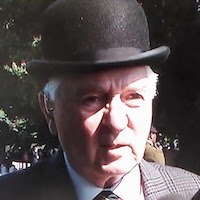 William and John Semken, father and son provided invaluable service to the Metropolitan College through lives that spanned almost all of the history of our College and Society.

William Richard Semken, a solicitor, joined the Metropolitan College 13 July 1922, became Secretary of the MSG in 1924, and Celebrant on 8 April 1937. He was appointed Recorder General in 1938, Junior Substitute Magus in 1944, and Supreme Magus in 1956 until 1969, when he resigned in favour of M.W. Frater Edward Kayley IX° and was made a Supreme Magus Emeritus.

From his early years in the Metropolitan College, he developed a close and enduring friendship with Arthur Edward Waite and was subsequently admitted in 1924 a member of the Fellowship of the Rosy Cross (F.R.C.). He was advanced to its highest grades and following the death of A.E. Waite ensured its survival through the preservation of its rituals and regalia.  In 1940 he was admitted and became the Prior in Waite’s C.B.C.S.

His contribution to the Society was to rebuild it after the Second World War whilst refusing to compromise on the quality of its ritual work and spiritual direction.  He also arranged in 1959 for the Metropolitan College and London College of Adepts to meet in the Grand Temple at the headquarters of the Supreme Council of the 33 at 10 Duke St James. Both of these Colleges have continued to meet there to the present day.

William Semken died on 30 July 1970, entertained and delighted by visiting Fratres who he had served for forty eight years.

John Douglas Semken C.B. M.C. was born in 1921 and educated at St Alban’s School. In 1938, he was articled to Sir Louis Gluckstein of Bartletts & Gluckstein, a London firm of solicitors, of which his father was a partner, and he joined the Inns of Court Regiment at the same time before being commissioned into the Sherwood Yeomanry in 1940.

He fought throughout the North African Campaign and at El Alamein. In 1944 he took part in the D-Day landing and for his bravery in combat he was awarded the Military Cross which he received from Field Marshall Montgomery. He was also awarded the Silver Star by the USA, and in 2016 the Legion d’Honneur shortly before passing away aged 95. He recalls his experiences in this short youtube film.

In addition to such honours, John Semken joined the Home Office becoming head of its legal service. He was also appointed Companion of the Bath in 1980.

He was admitted in to Metropolitan College 4 January 1957 and became Celebrant in 1963. He became a member of the William Semken College No. 15. (Warrant dated 2nd September 1966) and was Senior Substitute Magus, January 1975 – 1994. He was made Supreme Magus Emeritus May 2003 by M.W. Frater Andrew B. Stephenson IX°, Supreme Magus.

Serving the Society as its Senior Substitute Magus over several periods of office, his enormous contribution remained hidden to many fratres. Throughout his time in senior office, he provided the spiritual direction that no College, or Society, professing our beliefs could flourish without. Nobody who witnessed him installing the Celebrant of the Metropolitan College (which he did over many years), the insight of his contribution to the M.S.G., and his demonstration of the 0=0 ritual of the F.R.C. doubted that they were in the presence of a ritualist of great spiritual power. He also followed his father as a senior member of the F.R.C. and ensured that it became an active order once more.

His demeanour was formidable, and he held strong opinions not least on Freemasonry. He regretted the exclusivity of the Society’s requirement that candidates for admission must be Freemasons and hoped that the S.R.I.A. would create more distance between itself and Freemasonry. It was not a direction that his successors as rulers of the Society chose to take.