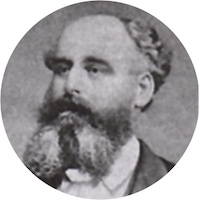 Born in 1828, William Woodman studied medicine, qualifying in 1851. He established a practise at Stoke Newington and also worked as a Police Surgeon. He had an interest and expertise in horticulture that was recognised at his death by the Royal Horticultural Society.

He was initiated as a Freemason in St. George’s Lodge, No. 129 (now No. 112), Exeter on 02/04/52; passed 27/01/53 and raised on 10 March that year and achieved Grand Office in the United Grand Lodge of England as Grand Sword Bearer in 1875. However, he was particularly active in the newly formed Order of the Red Cross of Constantine as Assistant Recorder General.

He was confirmed a member of our College with eleven others on 31 October 1867, being immediately appointed to the office of Conductor of Novices. He became Secretary on 1 February 1868 and Secretary General 16 April 1874, Junior Substitute Magus in 1876, and Senior Substitute Magus in 1877 on the resignation of W.H. Hubbard. At his death, Robert Wentworth Little left a sealed envelope appointing Woodman as the S.S.M. his successor and he became the second Supreme Magus of our Society. His fourteen-year rule saw our Society turn from London to England, and from England to Australia. Even to the United States whose 'Society of Rosicrucians in the United States of America' was recognised in 1880.

Yet he is known throughout the world not for his skill in establishing our Society nationally and internationally but for his role in the foundation of the Hermetic Order of the Golden Dawn. He received the Adeptus Exemptus Grade of the Golden Dawn in 1887 in name only and together with Mathers and Westcott founded the Isis-Urania Temple in 1888. He did not live long enough to be active in the further development of the Golden Dawn.

Apart from the mistake of dying too soon, Woodman also had the disadvantage of being insufficiently fashionable to receive the credit due for his extraordinary achievements. Mathers had a magical intensity, Crowley was simply dangerous whereas Woodman exhibited at the Chelsea Flower Show for goodness sake. Photographs of him tend to make him appear as a character written by George Grossmith, heading straight from a Lodge meeting to visit Mr Pooter at Brickfield Court. Even A.E. Waite couldn’t resist being unkind simply referring to Woodman as ‘an obscure occultist’. It was likely partly a question of age, he was 12 years older that Wentworth Little, 20 years older than Wescott, 26 years older than Mathers, and 29 years older than Waite. Old enough to be their father, he received the impatient misunderstanding we all are guilty of when we thoughtlessly speak of our own parents. Perhaps they regretted it, but unfortunately this caricature survived to be repeated by Ellic Howe and those scholars who followed him. Would that matter to Woodman? Probably not at all.

Woodman had passion and a vocation, serving as a volunteer surgeon in Paris during the coup d’état staged by Napoleon III. His manner was formal and reserved at a time when this was expected. His contemporaries in the Golden Dawn failed to see the wisdom in his discretion regarding any discussion of his profound knowledge of Hebrew and the Kabbalah.

As a retired surgeon living at Ford House, Alphington Road, Exeter in 1871, he travelled to London for each meeting, running the society during R.W. Little's illness and continued to write up the college minutes as Secretary General and then as Supreme Magus from 1874 until Westcott took over as college secretary in April 1884. He copyrighted in 1881 and printed the first Zelator ritual in 1882, not reprinted again until 1908 by Westcott.

He bequeathed a vibrant S.R.I.A. to his successor, and achievement that was not necessarily expected when he inherited a largely London based Society. Underestimated by many but never by Robert Wentworth Little who felt he could trust no other than Woodman to whom he passed a Society of the utmost importance.