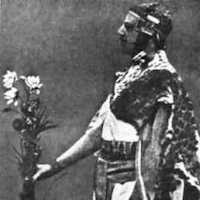 Born at number 108, De Beauvoir Road, Hackney, he was the son of William MacGregor Mathers, a commercial clerk, and his wife, Mary Ann (Collins). His father died during Mathers’ early childhood and his mother moved to Yelverton Road, Bournemouth, Hampshire, where he lived until her death from bronchitis and pneumonia in January 1885. He had developed an interest in boxing, fencing and military strategy and during his early twenties he joined the Hampshire Infantry Volunteers and translated a military manual from French into English.

Mathers moved to Great Percy Street, King's Cross, London, courtesy of William Wynn Westcott’s financial support. From there he published his translation of "The Fall of Granada" A Poem in Six Duans, translated from the French. There developing twin passions for what Yeats would later describe as magic and the theory of war. Some would say that both passions would later be used in his leadership of the Hermetic Order of the Golden Dawn. Initiated into Freemasonry in 1877, in the Hengist Lodge No. 195, he signed his Grand Lodge Certificate as ‘Comte de Glenstrae’.

Mathers was admitted into Metropolitan College on the 20th April 1882 with his friend and neighbour, Fredrick Holland, and they both lived in Bournemouth and mostly travelled up together. Soon after his admission into the Metropolitan College he added ‘MacGregor’ to his name, an early sign of the powerful imagination and brittle self - confidence he would later display. However, he wrote three papers for the College and also worked hard for the Society and received the 8 Grade in honoris causa in 1885.

When Westcott became Celebrant in 1899, Mathers replaced him as secretary for one year and was then elected Celebrant in 1891.  When Westcott succeeded Woodman as Supreme Magus, Mathers was appointed Junior Substitute Magus but immediately moved full time to Paris the following year (1892) and was unable to fulfil that office until replaced in 1900. His subsequent behaviour to Westcott and his inability to pay his annual dues resulted in him leaving the Society in 1903. He died in obscurity in Paris in 1918.

He published significant works, translating part of the Zohar as The Kabbalah Unveiled (1887), and a version of Solomon the King (1889). His most important work was The Book of the Sacred Magic of Abra-Melin the Mage (1898). But it is his role in the foundation and leadership of the Hermetic Order of the Golden Dawn that his reputation, even fame, depends.

The story of the Golden Dawn is the subject of so many books, articles, websites, and controversy that it need not be recounted in this brief portrait. However, there is perhaps a little more that can be said. The relationship between Mathers and Westcott was close and creative beginning with Mathers early books and continuing with the rituals of the First and Second Order of the Golden Dawn. But with great power comes those final tests that all must face. Mathers’s poverty and his dependence on those he believed were his magical inferiors drove an increasing autocracy that ultimately broke the Order. There are many reasons why Westcott never openly opposed Mathers in the sad events that followed but perhaps he knew that beneath the anger and accusations made by Mathers was the magus with whom he had journeyed furthest in search of the light of a Rosicrucian morning.

From those earliest affectations of Scottish nobility there were always signs that Mathers was choosing to live not in London, nor indeed Paris but in the extraordinary world of his imagination and magical intuition. In this he resembles none other than Don Quixote who sought a life of chivalry and romance but found a world unprepared for his passion. Never-the-less Quixote continued his quest determined never to accept that the world, the reality, in which he believed could not be. Cervantes tells his tale with elegance and irony, punning and allusion, romance and above all humanity. When Quixote refuses to lower his lance and yield to a windmill the reader does not laugh but weeps.

If Westcott is the greatest frater of our College then Mathers is its hero, a hero alas of its greatest tragedy.