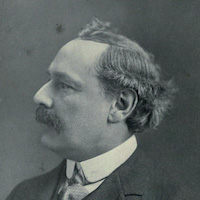 Born in Brooklyn, New York, he moved as a child to London with his widowed mother. Despite his limited formal education Waite embarked in 1876 on a career as a writer that he was to follow for the rest of his life.

Waite’s sister died in 1874 and his tragic loss impelled him to look further than the solace offered by the Roman Catholicism of his mother. He found Spiritualism and Theosophy unsatisfactory but turning to the books of Eliphas Levi the door was opened to his lifelong passion, the western hermetic tradition.

His book ‘The Real History of the Rosicrucians (1887)’ brought him to the attention of Westcott not least because the book contained the Ordinances of our Society with a somewhat sniffy opinion by Waite. It is a measure of Westcott that despite this he  arranged for Waite’s admission to the Hermetic Order of the Golden Dawn.

Waite’s initiation into Freemasonry in 1902 at first seems a sham, because he enters four orders in one year. He was made a Freemason with his friend M.W. Blackden and was initiated on 19 September 1901, at the age of 43, in the Runymede Lodge No. 2430 at Wraysbury in Buckinghamshire. As a courtesy to Runymede Lodge both Waite and Blackden were raised on 10 February 1902 in St. Marylebone Lodge No. 1305 and neither of them knew anyone in the lodge. You may speculate this was only to qualify for them for the S.R.I.A.

Following his initiation into Freemasonry, two months later Waite was admitted to membership of the Metropolitan College on the 10 April 1902. The following month both Waite and Blackden were exalted into the Holy Royal Arch in Metropolitan Chapter No. 1507 on 1 May 1902 and this would qualify them one week later to be installed as Knights Templar at the Consecration of the King Edward VII Preceptory. You could speculate that these two orders were the preliminary for Waite’s visit to Switzerland to obtain the C.B.C.S. Helvetica and be admitted on 27 February 1903.

But in December 1902, Waite laid the plans for a ‘Secret Council of Rites’ to contain: Royal Arch Masonry; Martinism; Independent and Rectified Rite of the Golden Dawn; Rite of Swedenborg; the new Reformed Adoptive Masonry Order of the Eastern Star; Order of Revived Illuminati; the C.B.C.S.; and he then added the Daughters of Zion; the Rite of 7.16; and finally the Supreme Crown or 3rd Order R.R. et A.C.

By 1903 he was chair of the Metropolitan Study Group, but did not remain long as he thought the papers belonged in a cemetery. There were soon signs of his deteriorating relationship with the then Secretary General, Arthur Cadbury-Jones that would overshadow his membership of our College and ultimately lead to his resignation. After a dispute over the publication of papers Waite resigned as chair of the Study Group but continued to attend the College passing through each office reaching that of Exponent in 1913. As the date of his election as Celebrant drew near, at a study group meeting Cadbury-Jones was asked to change his paper and objected; because of Waite’s view that Christian Rosencreutz was a spiritual not historical figure. Cadbury-Jones then argued Waite’s unsuitability to be nominated as Celebrant.

It was of course a spurious objection as are often those used to cloak a more venal motive. But Cadbury-Jones was astute enough to build support for his objection and Westcott was obliged to speak to Waite and inform him that there was insufficient support for his election as Celebrant. In response to this Waite took the only action he could which was acceptance and resignation.

Waite had meanwhile continued his leadership of the Independent and Rectified Rite of the Golden Dawn. He strove to preserve some of its legacy during the turmoil of its increasingly vicious factional disputes but ultimately the Order collapsed in 1914. However, Waite was then able to create a fully mystical Rosicrucian order and founded the Fellowship of the Rosy Cross on 9 July 1915; whose members included those from our Society such as its future Supreme Magus, William Semken. Through the Fellowship and Waite's warrant for the Order of Chevaliers Bienfaisants de la Cite Sainte, he was able to exert a wholly beneficial influence on the spiritual direction of our Society.

Waite’s reputation has perhaps been clouded by the style of his prose and the wordiness of his rituals, rooted as they are in his prime as a writer of the late Victorian and Edwardian periods. Crowley somewhat unkindly referred to him as ‘Dead Waite’ and of course they both seem so different. Crowley whose posthumous notoriety made him a psychedelic icon when poor old Waite languished in sepia tinted obscurity. And yet each produced innovations in divination that transformed, even re-invented the art and practice of the Tarot. The pack and accompanying book that Waite and Pamela Coleman Smith produced was not only the most astonishing development in the history of the Tarot, but remains the bestselling pack.

Waite was probably the greatest Rosicrucian mystic to have been a member of the College.