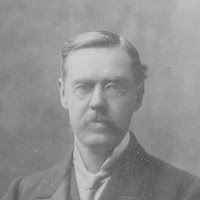 Born in Nottingham in 1853, Felkin had a life changing meeting with David Livingstone at Wolverhampton Grammar School and spent time as a missionary in Uganda and Zanzibar where he began his medical training. Returning to Britain, Felkin qualified as a doctor at the University of Edinburgh, taking his MD at the University of Marburg before returning to Edinburgh University as a Lecturer in Tropical Diseases. He spent the rest of his career as a consulting physician. He married his first wife, Mary Jane (Polly) Mander (1855 – 1903) at Wolverhampton on 8 February 1882, she died 18th January 1903.

They were initiated into the Amen-Ra Temple, Edinburgh, of the Hermetic Order of the Golden Dawn on the 12 March 1894, entering the Second Order by December 1896. Moving to London soon after they became joining members of the London Isis-Urania Temple. Shortly after arriving in London, Felkin started to become convinced that he was in direct communication with the Secret Chiefs of the Golden Dawn whom he referred to as ‘Sun Masters’.

The Golden Dawn split soon after 1900. Mathers led the Alpha Omega Temple in Paris and the London members renamed themselves briefly as the Hermetic Society of the Morgenrothe in June 1902, consisting of such members as Robert Felkin, John William Brodie-Innes, A.E. Waite, Rev. Ayton, W.B. Yeats and others. The Morgenrothe then broke into two groups. Those who were most interested in Christian Mysticism (led by A.E. Waite) took over the remnants of Isis-Urania, and formed the Independent and Rectified Rite of the Golden Dawn (and later the Fellowship of the Rosy Cross). Those from the Morgerothe who were more interested in occultism (led by Dr. Felkin) formed the group 'Stella Matutina'- naming their Mother Temple 'Amoun Temple' (not the Secret College) in his house at 41 Basset Road, London. From 1906 pledge forms were modified by crossing out Morgerothe and being replaced by Stella Matutina.

Felkin had views quite unlike Mathers and Waite believing not just in the living reality of the Secret Chiefs but also in the historical existence of Christian Rosencreutz. In this his perspective echo’s the modern tendency to believe many hermetic phenomena have a material historical existence. He embarked on a fruitless search for the tomb of Christian Rosencreutz, as well as the residence of Anna Sprengel, between the years 1906-14.

Initiated into Scottish Freemasonry in Mary Chapel Lodge, Edinburgh, on 8 January 1907, only to qualify for membership of the S.R.I.A. to use them to spread the Stella Matutina order. A Master Mason by the end of February, two months later he was admitted a member of the Metropolitan College. He contributed to the Metropolitan Study Group and received Grade 9 of our Society on his appointment as Inspector General of the Australasian Colonies in 1915. He was installed by the Supreme Magus, William Wynn Westcott, as Celebrant of Metropolitan College in 1916 for about five minutes, to give him more credibility in Australia but, after thanking Westcott, he resigned because of his own planned emigration to New Zealand. Felkin subsequently served as Chief Adept of New Zealand until his death in 1926.

In New Zealand, Felkin continued to lead the Smaragdum Thallasses Temple of the Stella Matutina which he had founded, also known in the Māori Language as Whare Ra ‘House of the Sun’. The Temple met in its own premises, a building designed for its use, in Hawkes Bay which still survives and continued in unbroken sequence until 1978 when rather than simply fade away its remaining members decided to close their Temple. They honoured their vows and acted in conformity with those rules that govern all Hermetic Orders by burning their regalia, robes, rituals, and records, returning them to those Masters whose representatives on earth they were.

Though the flames of that last bonfire may have died their light joined that of the Colleges of the Province of New Zealand, both guided by Felkin, and which still illumines the extraordinary Rosicrucian achievements made in that country.

What would have Wentworth Little made of Felkin's work in a land so distant from our College in London. I rather think that had he lived Wentworth Little, though by then elderly, would have thought a journey to Hawkes Bay very worthwhile indeed.