Son of Perdition: The Magic and Hubris of Simon Magus 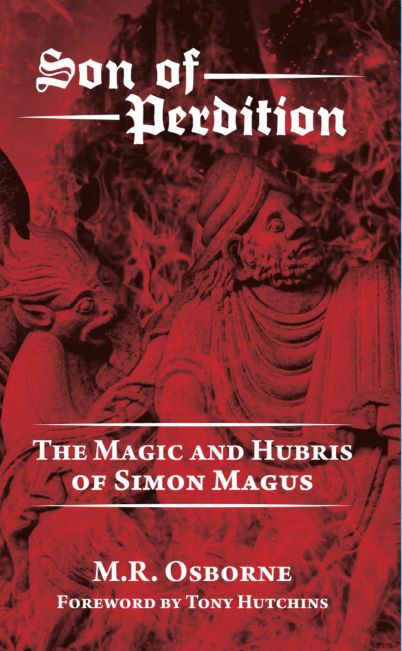 A retelling of the legendary conflict between ancient magic and the Apostolic Church.

In our present day and age the story of the confrontation between the Apostles and Simon Magus has become increasingly forgotten. M.R. Osborne considers the relationship between miracles and magic as they played out in this dramatic encounter.

The author investigates how ancient magical operations - such as necromancy, transmutation, sex magic and transvection (amongst others) - acted as opposing forces to the sacramental powers of the Primitive Church.

The appearance of Simon Magus in the New Testament is colourful but brief, and more questions are raised than answered. Researchers are compelled to look at the apocryphal legends and writings of the early Christian apologists to discern what they can about Simon. Many of the legends regarding his magic and conduct are fantastical, others less so. Yet theologians and writers on religion alike tend to disparage these accounts, and write off Simon as a type, a legendary figure of anti-pagan polemic. Sometimes, the boot has been put on the other foot, and Simon is identified with St. Paul, as a Gnostic Apostle. What is the truth, and what were Simon's magical operations actually like?

Author M.R. Osborne studied Theology at the University of Birmingham, at both undergraduate and postgraduate levels. He ultimately qualified as a lawyer, and retained an academic interest in Christian mysticism and ancient esotericism. His approach to the question of Simon Magus has been to set aside the polemical argument and to treat Simon's magic seriously. If, for the sake of argument, we treat the apocryphal and apologetic material as containing (at least 'some') authentic historical fact (even if fragmentary), then we may begin an attempt to reconstruct his life and possible beliefs. This is all set in the context of Simon's battle with Peter as it moves from Samaria to Rome, and a study of both men is required to make sense of what Christians and Jews alike regarded as legitimate or illegitimate magic. Thus, did the Apostles practise magic? Does the Church still do so? What differentiates miracles from magic?

More interesting still, is the question of Simon's status as a false messiah or antichrist. There are various definitions and perceptions of this role in the New Testament, and it is likely that false messiahs are set apart from the False Messiah, and antichrists from the Antichrist. Into which category does Simon fall, and does his magic and moral conduct throw any light on the question? Crucially, what relevance does this have for us today in our modern, secular world? The author looks into these issues and present a case for Simon Magus being a real magician, practising generally negative operations as a false messiah. There are no hard and fast or definitive answers as the primary sources are too few, but with careful analysis we can reconstruct the most likely scenario.

The author has chosen illustrations from both the early Church period and later middle ages, since the manuscript discusses the possible connection of ancient Jewish magic with the later medieval grimoires.

With a foreword by Tony Hutchins of Sirius College No.57, Societas Rosicruciana in Anglia.